Often sewing her trauma directly onto fabrics, artist Zoë Buckman’s work always starts from an autobiographical place; for the London-born creator, art making is a meditative practice, one that helps her interrogate deeply personal experiences and transitions.

“Usually the impetus for a series will be something that I’m grappling with or finding difficult or complex,” she tells Observer. “Then from that place, there’s usually an expansion where I speak to other women or other people about their experiences.”

Some five years ago, Buckman was working with a Jungian therapist who encouraged her to have a stronger relationship with her “shadow self”, i.e. her subconsciousness.

“He explained to me, imagine a part of you that fights for you and creates all your work for you. Maybe she’s bigger and stronger but she exists within you and she’s unchanged by external forces.” Quickly she realized she didn’t have a great relationship with that part of herself — figuratively, she was in a cage, and it was time she came out.

The therapist encouraged her to give her shadow shelf a name to visualize this better; Buckman landed on “‘Nomi’, which is a play on the phrase ‘you don’t know me but I want you to know me.’” It wasn’t until the pandemic that the artist began incorporating her shadow self into her artistic practice.

“Lockdown was quite a fertile time for me, honestly, creatively and spiritually, because I was like, wait, hang on a minute. I actually have a practice that involves connecting to a force within myself that is always free and joyful and creative,” she says. While the circumstances were morbid, she saw the time as an opportunity to double down. When the pandemic hit it instantly triggered memories and she decided she wanted to forge a better relationship with Nomi.

“Nomi“ is the artist’s first solo presentation in London at Pippy Houldsworth Gallery, which opened on February 12 and runs through March 13, 2021, presents a collection of pieces born from grief and trauma Buckman has been processing over the past two years to explore the dualities of hard and soft, masculine and feminine, domestic and surreal.

It was around 2016 that her work gained real traction thanks to her “Every Curve” exhibition; for the collection of work, she embroidered misogynistic lyrics and text onto delicate, antique lingerie, meant to represent her personal experience with sexism and the larger collective experience of womanhood. Using socially constructed objects of sex and desire, Buckman sought to critique the male gaze and violence against women, which are key threads woven through all of her work even still today.

“My first proper solo show, I had pieces of lace from my grandmother and I used textiles to speak about the female experience,” she says. Later, when she was going through a divorce, she began using discarded vintage wedding dresses; when her mother became sick, she started looking deeper into home textiles and table runners. 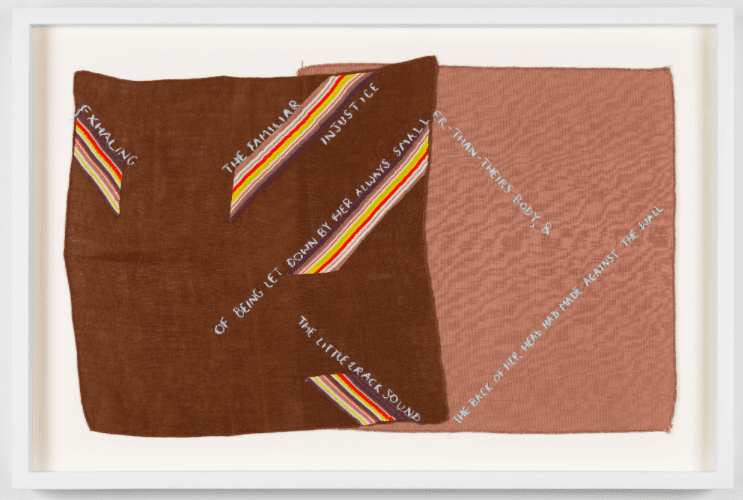 Around the time of the 2016 Presidential Election, Buckman also started taking boxing lessons, which inspired her to create custom boxing gloves for her exhibitions using different textiles to represent each theme. The gloves are a response to what felt like a mounting war on women and helped her deconstruct the toxic masculinity and aggression she grew up around in East London in Hackney, circa the 1980s and 90s.

Material wise, the artist has been collecting vintage textiles for the home, whether those are hankies, tablecloths, or table runners that come from thrift stores, online, or sometimes through auctions. Initially she used lace tablecloths that belong to her grandmother, now friends and family will offer up things they find.

She finds it interesting that a piece of fabric was intimate and significant enough that someone kept it safe and passed it on. Not knowing what stories those fabrics hold was interesting to Buckman, and she thought that would enrich the narrative of her own life.

Her process starts with the actual fabric itself. “I’ll select one that I think is different or interesting to me. Often it might be about some embroidery that’s already on there in the patination, or it might be a stain or a way in which it’s torn,” she explains. “Then from that, I’ll typically decide if that’s something that I then want to use as a flat work.”

Digital machine embroidery is something she also taps into; in her mind, it is something that infers the relationship between the masculine and the feminine. “I often think if it’s a particularly fragile piece of textile, I’ll probably take that to the digital embroidery shop where the text is much harder, a lot more concrete and feels more, typically masculine because I’m interested in that juxtaposition.”

Knitting and sewing textiles, which was once considered solely “women’s work”, speaks directly to the feminine experience. While Buckman may not know the origins or stories behind all of the fabrics she uses, this only adds to the impact of the work. “I enjoy the process of taking something that was old or used and leaving it up to the viewer to imagine what stories might already be in the garment before I obstructed it.”

Right before the pandemic hit, Buckman went on a pilgrimage to India. “I took my mother’s ashes and I offered them back to the ganjas. There’s a lot of influences within this series, um, of spirituality and deities from when I was in India and learning about Kundalini yoga.”

According to the Vedas, ancient Hindu scripture, the artist says your left and right brain are controlled by two energy channels that snake down your spine almost intersect and carve out each chakra point. “A lot of the work [in the exhibition] has to do with accessing this inner snake energy, which is also connected to Shakti (energy source) and feminine power.’

Historically, snakes are animals associated with temptation and sex. “I find that the whole motif of snake is really interesting when we’re talking about femininity, but when we’re also talking about these aspects of ourselves that should not be at odds where we could be wild and also pious, but society and patriarchy will have us believe that we can’t be both of those things and that we have to make a choice.”

Snakes are very much about wilderness and power, but Buckman also sees them as a way to speak to the patriarchy and how it forces us to disengage from that side of ourselves,” she explains. “Women who are more in touch with the darker sides of themselves are often outcast in society.” 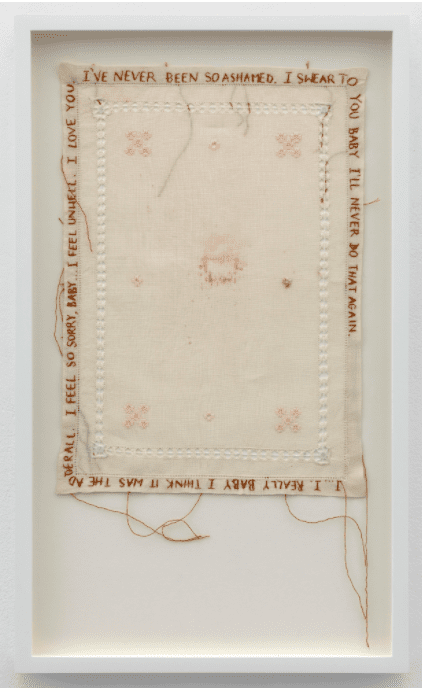 Recently Buckman has been exploring a psychotherapy called EMDR (Eye Movement Desensitization and Reprocessing) with a grief counselor to process these past traumas and experiences of violence. “EMDR uses the left and right cortex of the brain to move that stuck trauma from the center part of the brain,” she says. This inspired her to work with lace doilies because they resembled brains. In the exhibit two doilies are positioned next to each other, their threads either tying together in the middle or bleeding from one end to the other.

“I’m still in that space with this new series where I’m still looking at the home and things easily identified as feminine and so every single piece of textile,” she says. “Whether it’s on one of the sculptural glove clusters, or whether it’s on the framed flat works, everything is a vintage piece of textile that’s domestic in some way.”

The artist never intended to make work about the experience of being a woman. “That’s just how it’s organically evolved as I’ve gone through a divorce and then losing my mother, and then addressing certain experiences I had with violence within relationships and with heartbreak,” she explains. “Plus, as a woman in the art world, a male dominated industry, I’ve had to figure out how to hold my own and how to occupy space, even in interviews or art events, because confidence and feeling like I belonged didn’t come naturally to me that that kind.”

“I hope that [this exhibition] will encourage people to embrace all the aspects of themselves and, and to not feel that they have to commit to some kind of binary idea of ways to be a woman or even what it is to be a man.” She believes it’s important to point out that men are also held to these unfair standards.

Buckman is proud of the work and excited to be showing it but says she’s not done with the series just yet; more exploration of these mediums and themes are underway and she’s also in the process of directing her first short film slash video installation, which is an entirely new medium she will be exploring this year. We’re excited to see what shape her work takes her next.

Queen Elizabeth Knows Who Will Take Over Harry & Meghan’s Patronages