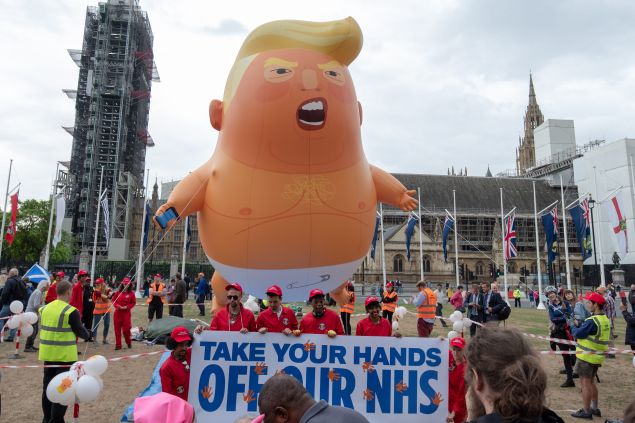 As Donald Trump’s presidency careens towards its inevitable conclusion, it’s tempting to look back at the past few years to evaluate if there were any particularly bright artistic spots worth mentioning. In 2018, when Trump paid a visit to the U.K. to meet with Theresa May, Britain’s former Prime Minster, hundreds of thousands of protesters and demonstrators welcomed the American president with a 20-foot-tall inflatable balloon in the shape of a bright orange baby bearing Trump’s face. According to new reports, the balloon, which was flown over Britain’s Parliament in the summer of that year, has just been added to the official collection of the Museum of London.

According to the Associated Press, the museum will add the enormous blimp mockery of Trump to its protest collection, which also includes artifacts culled from demonstrations regarding all kinds of different issues, such as public spending cuts, opposition to the Iraq war, women’s suffrage; etc. It’s a huge accomplishment for the people who made the so-named Trump Baby Blimp, which was originally floated as a potential idea via a crowdfunding campaign. “We hope the baby’s place in the museum will stand as a reminder of when London stood against Trump, but will prompt those who see it to examine how they can continue the fight against the politics of hate,” the blimp’s creators said in a statement.

“By collecting the baby blimp, we can mark the wave of feeling that washed over the city that day and capture a particular moment of resistance,” Sharon Ament, the Museum of London’s director, also added in a statement. When political leaders inspire particularly vehement dislike or criticism from the general population, it’s been commonplace throughout history that parody art has been made in response; either to wound the politician’s ego or to show them in an entirely new light. The Trump Baby Blimp may not be subtle, but, like the balloon’s namesake, it’s both garish and, on some level, perversely amusing.

Cartier Tank Cintrée: You Probably Didn’t Hear Much About This Watch. That’s the Point.